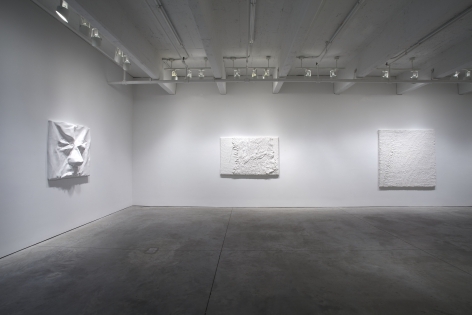 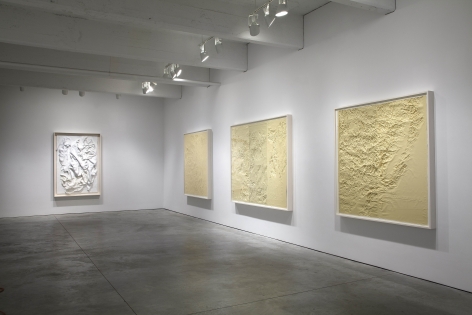 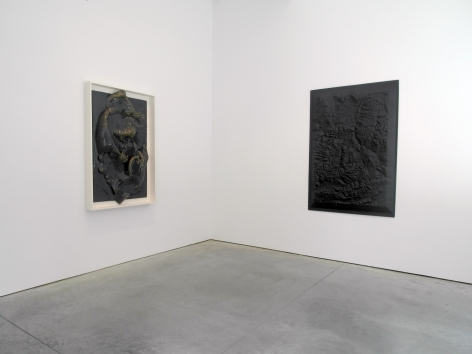 For Sacco (1) and Sacco (2), Dupont used a high-resolution scanner to laser scan a small series of elemental canvases in burlap and gesso, enlarged the originals roughly 500%, and cast the results in white resin and marble dust. The ensuing monochromatic reliefs open up dynamic new spaces of inquiry for Dupont: They engage abstract painting as a dialogue with external methods and meanings, sample aspects of collage and the readymade, and extend elements of performance into the art object. Collapsing hierarchies of media, these works are part digital enlargement, part sculpture, and part painting. As the titles suggest, the works may allude to Alberto Burri’s Sacco paintings, which he began making on discarded sugar sacks while interned in an American prisoner of war camp after the Second World War.

The exhibition also includes new work based on U.S. Geological Survey (USGS) topographic relief maps and large-scale West German relief maps. With origins in territorial boundaries, the USGS—along with several other international bodies—has now surveyed and mapped via aerial scanning every inch of the earth’s surface. Dupont inverts and embosses the backside of these found rubber maps with cryptic titles appropriated from Walt Whitman poems, which he translates into binary code. In doing so, he creates objects that are at once Orwellian and transcendental.

Issues of mapping are further explored in Shadow Aspect (light) and Shadow Aspect (dark). Dupont brushed rubber over a positive form based on a scan of his head, and then peeled the rubber away as if a "skin." Visceral and process oriented, these "skins" were collected and assembled on wood panels, and then additional silicone was brushed and poured over them. More unconscious and spontaneous than deliberate, the forms within these compositions may have derived originally from a digital replica of the body, but ultimately devolve into the scatological and formless.

Defined largely by dialectical juxtapositions, these works present simultaneous contradictory conditions: light and dark, revealing and concealing, seen and unseen, natural and industrial, the thing itself and its representation, the two dimensional and the three dimensional, and the handmade and the machine made. They also extend Dupont’s exploration of the techniques of digital and computer-assisted fabrication, as well as the broader social uses and implications of these processes. As the critic Hunter Braithwaite writes, "In 2004, [Dupont] traveled to Wright-Patterson Air Force Base in Dayton, Ohio, in order to truly map his body. This endeavor, which at first seems like a Whitmanesque pilgrimage of self-discovery, is mediated through the contemporary American military-industrial complex…the resulting data used to construct a ‘surrogate body’ is normally sold to arms contractors making blast helmets and flack jackets. It’s also sold to big-box retailers such as the Gap looking to design clothing to fit target demographics….the same research is equally applied to the clothing and the destruction of the body."1

Dupont’s work of the past few years has been characterized by strong visceral and material content and a process-oriented approach. As he recently wrote, "I have always been much more interested in physical, material residue than information, but technology is a great tool as long as you disrespect it…using things, whether ideologies, machines or materials, in ways that they were not meant to be used, can be a good way to work."2

In addition to "Shadow Work" at Tracy Williams, Ltd., Richard Dupont will present a simultaneous solo show at Carolina Nitsch Project Room, "Going Around by Passing Through," opening also on May 2 from 6-8 pm. The exhibitions will run concurrently and will both consist of entirely new works in various media.